Couldn't find an old thread on the subject so here we go...

When I was working with the Malaysian comps update I also delved into their 80's Metal scene in general. To be honest I haven't really found any outstanding hidden gems yet - some of the best songs are still to be found on those comps imho - but there were A LOT of HR/HM albums released from this area in the late 80's and early 90's, mostly in the more melodic field. All albums were released on cassette and a fair share of them also exist as very limited promo-LP versions. Ignoring the fact that about 40-80% of the material on these albums were ballads (apparently a requirement in order to get signed), what stuffs have you come across that's worth hunting down?

Concerning Singapore, I think ROCKERS and RUSTY BLADE stand out as bands well worth checking out. I'm also curious to find out if the 3rd (and best) ROCKERS-album "Andalusia" exist on vinyl?

to be continued...
Veterans of the Various-Wars - New Corroseum compilations-compilation series!
Top

Nothing really great!
Some i find quite good are Bloodshed, Crossfire, Dinamik, Handy Black, Justice and Victim.
And Brainwash for the cover!

I was living for 2 years in Singapore.
Was not actively searching for all the time but this is what I came across (reposting photos)
Rockerz, Dinamik and Spring were really good. As was said before, the majority of the scene was Malay Rock Ballads (still a thing in SE ASIA, if you visit any KTV bars you'll see what I mean, sayang)

@apollo.ra:
That's some impressive stuff! Is the ROCKERZ LP as good as the 3 previous ROCKERS albums? I haven't been able to find a digital copy of that one yet..


Here's a good example of the "Malay Metal Dilemma":

...and this actually exist on vinyl(!)
The rest of the album, however = ballads & softy hr

This incidently is their 3rd album, so I'd love to hear their 2 first if anyone got them to share?
Veterans of the Various-Wars - New Corroseum compilations-compilation series!
Top

It's actually insanely good. I love it.
Once i stumbled upon a blog describing it as "the Malay RIOT".

Raw Speed/Power with great guitars in the vein of early Helloween comes to mind when hearing the titletrack Dukun.
Another personal favourite, though not on the LP version but only on the cassette is the Sengketa. Enjoy:

Posting an old pics as well because Vicrtim is my absolute favorite of that scene, the Metal songs have so much energy and I love those vocals, it was worth tracking it down! The Brainwash has a few good songs but I'm keeping it up for trade, if anyone is interrested, just contact me If I can point out the only Malaysian band who hails this scene in the right way :
[youtube]https://www.youtube.com/watch?v=w7KClhR8tlw[/youtube]

I was simply amazed by this album, it's like all these old bands but without the mellow shitty ballads! check it out!
Top

The title track of the Odyssey album (I have a vinyl copy of this) is quite amazing Epic Metal:
[youtube]https://www.youtube.com/watch?v=JZwuyUf9fHY[/youtube]
It's not easy to be the Antichrist ...
Top

And one more advice, if you see too many "Cinta" on the tracklists of the albums then you know these are the cheesy trax coz "Cinta" means "love" in Malay I was taught by a malay girl once ... but not what you're thinking of now! lol
It's not easy to be the Antichrist ...
Top

I wish a Malay girl would teach me love too!
Top

I don't have any info but if it helps i have some old Malaysian Heavy : 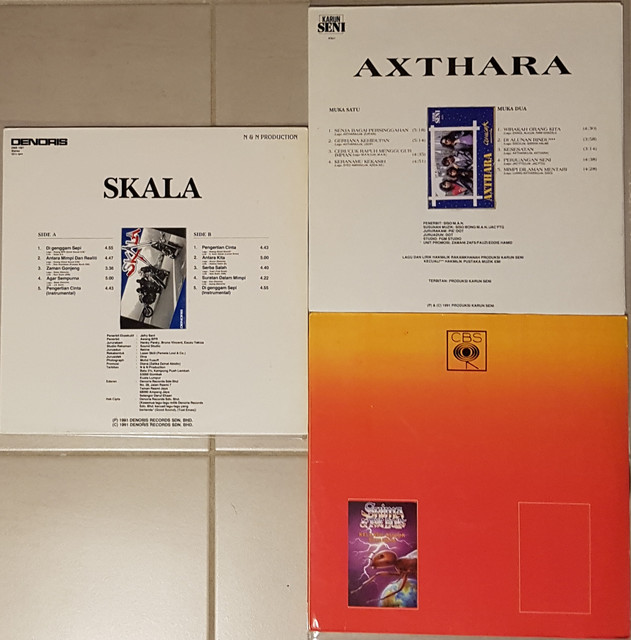 Waiting in transit at a Singapore airport so of course I had to revisit this thread. Yep, that Rockerz album sure does sound promising. Seems "Andalusia" is the only album yet unconfirmed as a possible vinyl release.

To be continued..
Veterans of the Various-Wars - New Corroseum compilations-compilation series!
Top

DaN wrote: ↑
Sat Feb 08, 2020 12:39 am
Waiting in transit at a Singapore airport so of course I had to revisit this thread. Yep, that Rockerz album sure does sound promising. Seems "Andalusia" is the only album yet unconfirmed as a possible vinyl release.

it does exist, I had it and some time ago the Teenage Head shop in Subang Jaya (Kuala Lumpur) had it for sale.
It is on sale quite often on the various facebook groups, but until now Ive seen only the promo vinyl only

DaN wrote: ↑
Sat Feb 08, 2020 12:39 am
Waiting in transit at a Singapore airport so of course I had to revisit this thread. Yep, that Rockerz album sure does sound promising. Seems "Andalusia" is the only album yet unconfirmed as a possible vinyl release.

it does exist, I had it and some time ago the Teenage Head shop in Subang Jaya (Kuala Lumpur) had it for sale.
It is on sale quite often on the various facebook groups, but until now Ive seen only the promo vinyl only

Thanx for confiming - the hunt is on!
Veterans of the Various-Wars - New Corroseum compilations-compilation series!
Top

by the way, I made a massive update of malaysian early releases on M-A, including every possible existing version of each individual release (tape, vinyl, promo, alternative cover, unofficial indonesian version wth different artwork/title)... there should be lot more bands to be included but i don't know if they are going to accept them.... as far as only half (or less) of the songs are pure metal and the rest is just shitty love ballads (cinta = love, rindu = to miss, air mata = tears, hati = heart: these are the most "dangerous" words when you come across a malaysian release

), there is a high possibility they could not be included, but the list of malaysian/singaporean bands who released interesting stuff is endless:

and others.... most of them have been reissued recently or there are early 90's first press on cd or even promo vinyl edition.

More or less we can say the same about Indonesia, who was a sort of minor-scale copy of the malaysian scene until mid 90's when suddenly bloomed the brutal scene, but also Indonesia had several interesting hard/metal bands not yet listed (and probably, never going to be) on Metal-Archives, such as Axe Gang )with a female singer), Armada Borneo, SAS, Kayakas, Mel Shandy (the indonesian answer to Ella), God Bless (a seminal band which marked the juncton between hard rock and early metal music in the country, with the album "Semut Hitam" and the followings)... but none of these have been ever released on vinyl.... the indonesian market had been considerably poorer compared to malaysia and only bands on "major" labels such as Logiss Records could get a CD treatment in the best case.

and there are some bands who appeared on compilation only, like Whitesteel, Trashed, Last Minute, Menara on the various "Battle of The Bands", "Clash of the Bands", "Juara Juara Rock" as well as other less known compilation like the three "War Metal Rock" compilation on Mutiara Records (the 2nd volume is the most interesting with Stroyer, BC Rockers, Dewanaga and Kejora and also the 3rd volume with Cakrawala and Eyes Killers, Spring being the only band who went to release also full albums. They have been reissued on very hard to find cds a 4-5 years ago), or the "Selekta 1" compilation tape or the two Gegaran '88 (a split tape between Medusa and Hurricane, who never released anything else) and Gegaran '95 (which, on the contrary has only shitty glam stuff) and much more....

the problem of malaysian/singaporean "rock kapak" (that's how it is called this kind of commercial metal which may range from savage metal/speed to tons of cheesy slow rock/soft love ballads) is that maybe only 2 or 3 songs are properly metal, and even of really high quality, usually at the beginning and end of each side of the cassette but topped with tons of cheesy slow rock/love ballads to please the audience and the radio station....

And I am studying the malaysian music production of the late 80's and early 90's.... apparently around 1991-1993 there has been a massive production (inclding reissues of album previously released on cassette only) of CDs which are almost impossible to find nowadays as they all are in the hands of few collectors who stock hundred of copies of each of these first pressing. But I was surprised to see how many releases were issued or reissued on cd (including also compilation, split, sampler...) during 1991-1993 and then disappeared. To find these early 90's pressing nowadays is impossible unless you have trusted contacts on the spot and additionally malaysians rarely share or sell these rarities to foreigners as they want to keep this stuff for themselves only. (sad).

And-, at the same time, around 1988-1991 there was also a massive vinyl production when most of the albums (particularly on Warnada, Life Records, NSR/New Southern Records, Mega Records, Emi/Polydor) were issued for radio station. Usually big/major label issued n vinyl the full lenght album while other minor/smaller label issued a shortened vinyl version omitting a couple of songs per side.

But to find all this stuff nowadays is very hard unless you go to malaysia and you bring a lot of money. it rarely circulates or it is never offered to foreigners unless you are willing to pay double or triple the (already fucking priced) local price

then the second half of the 90's and the whole 2000's have been flooded with hundred and hundred of totally useless compilation by major labels to milk as much money as possible with reissues, best of, split, best of the best of, selection of best of that can easily be avoided. but until 1992-1994 the market was interesting. after 1994 everything became commercial, mainstream and really shitty, in general. most of bands disappeared or released more and more commercial albums. and tons of compilation, best of and absurd split with pop/non metal bands only.
Top
Post Reply
22 posts