Thought I'd take a break from posting goofy stories and wacky album reviews, and instead try to provide some useful info. So, if you ever thought, "gee, I wish someone would inundate me with more information about various pressings of 'Ample Destruction' than any sane person would ever want", then this is the thread for you!

All details below come from copies of 9 different versions I have inspected in person; none of that "uh, I saw it posted somewhere on the interwebs 10 years ago" bullshit here. There are definitely other versions out there; this is not meant to be a complete list.

I have not included any info about the recent reissues on High Roller; I think we can all figure out those on our own.

2- numbered pic disc (107 of 150) with skyriders art fully covering 1 side, band photo completely fills the other side
no matrix #s
insert (yellow) with Iron Works info on it
I've been told this is a boot made in Europe long after the orig pressing

5- 'test pressing', clear vinyl
Came w/ orig cover.
silver lbl with black print, says 'advanced test press'. No album title given on label on one side, 'License To Kill' is listed as the title on the label on the other side.
Track list has License, Warfare, Symph, and Harder on one side, then Generally, Reign, Break Ya (aka Cardiac Arrest), & Crucifix on other, so 'The Watching' is omitted.
Matrix:
JP 485001-2 "IRON WORKS"
JP 485001-A "IRON WORKS"

6- orig pic disc
tank art on 1 side, band photo on other side. Same band photo as on the numbered pic disc described above, but here the pic does not fill the entire side; there is some 'black space' along the sides.
I don't have the track list written down.
Matrix
IW 1001-A kdisc KP YES HE STILL IS L-17904
IW 100-B kdisc KP D.T. DID IT L-17904-X
So, same as orig black vinyl pressing given above
In plain, black, die-cut cover

7- One-sided pic disc 'test press'
skyriders art on the non-grooved side, art does not fill the entire disc; white space around the sides with "Jag Panzer, "License to Kill", Advanced Test Pressing" written in the white space below the picture. The other side has a gray label with black print and credits the title of the album as "License to Kill".
Matrix
JP 485001-A "IRON WORKS" (same as the 'test press' described (#5) above)
In plain, black, die-cut sleeve
Track list is License, War, Symphony, Harder (same as on A-side of the 'test press' described above)

8- 'test press', black vinyl
Did not come with orig cover.
Silver lbl with black print. No album title given on label on one side, 'License To Kill' is listed as the title on the label on the other side.
Track list on both sides identical to the 'test press' described above
Matrix
JP 485001-2 "IRON WORKS"
JP 485001-A "IRON WORKS"
So identical to the test press and the 1-sided pic disc described above

9- clear vinyl orig press
Silver label, red print
Held up to light, it appeared perfectly clear. When laid down on the plain white inner sleeve, it might have had a very slight yellowish hue.
Track list same as orig press (#1) described above
Matrix
IW 1001-A kdisc KP YES HE STILL IS L-17904
IW 100-B kdisc KP D.T. DID IT L-17904-X
So, identical to the orig black vinyl press

SUMMARY
Let's ignore the Canadian and French pressings and the numbered pic disc; those were obviously individual pressings not tied directly to Azra/IW.

Labels
Original pressings may have black or red print on the label. All call the album "Ample Destruction".
All later pressings with the JP matrix have black print. These have no title listed under 'JAG PANZER' on one label but 'License to Kill' listed as the album title underneath 'JAG PANZER' on the other side.

The original plates were used on the black vinyl, clear vinyl, and tank pic disc described above.
The 'JP 485001-" plates were used for the black vinyl test press, the clear vinyl test press, and the 1-sided pic disc test press.
Many collectors seem to agree that the versions I'm referring to as 'test presses' (#s 5, 7, and 8 ) were actually pressed up much later, in the late 90s/00s. That seems to be when they started appearing on ebay and the collector's market, where they were advertised as 'test presses' (that is why I'm calling them test presses, though they may not be 'test presses' in the traditional sense of the term). All three of these versions definitely came from a set of plates different from those that were used to press up the official release of 'Ample Destruction'.
Last edited by nightsblood on Sun Oct 11, 2020 8:40 pm, edited 1 time in total.
"I'm sorry Sam, we had real chemistry. But like a monkey on the sun, our love was too hot to live"
-Becky
Top

I wonder how many different ones I have, might take a look this week!
Top

Wow, great research. I have 2 versions: Original black and the metalcore. Used to have two picture discs. Would love to expand this collection. The album is that good it deserves its own collection within the collection.
Long Live The Loud !!!
Top

Great work, Alan! Added a link to this thread from the Ample-slot on the Iron Works-page.
Veterans of the Various-Wars - New Corroseum compilations-compilation series!
Top

Here is my couple versions. The sealed copy has a different back cover. I am told this is a colored vinyl version but I flat out refuse to open it to find out but the sealed one has a much cruder back cover compared to the Test Pressing jacket. You will also notice Reign of Tyrants and Reign of the Tyrants track difference. The Metalcore version is autographed and the tank picture disc is just as badass as the day it was bought new

If any of these will help your archive, help yourself. I have a pretty rare insert for the Tyrants EP also I should pull out. I came with the License to Kill EP and I have never seen another copy of it 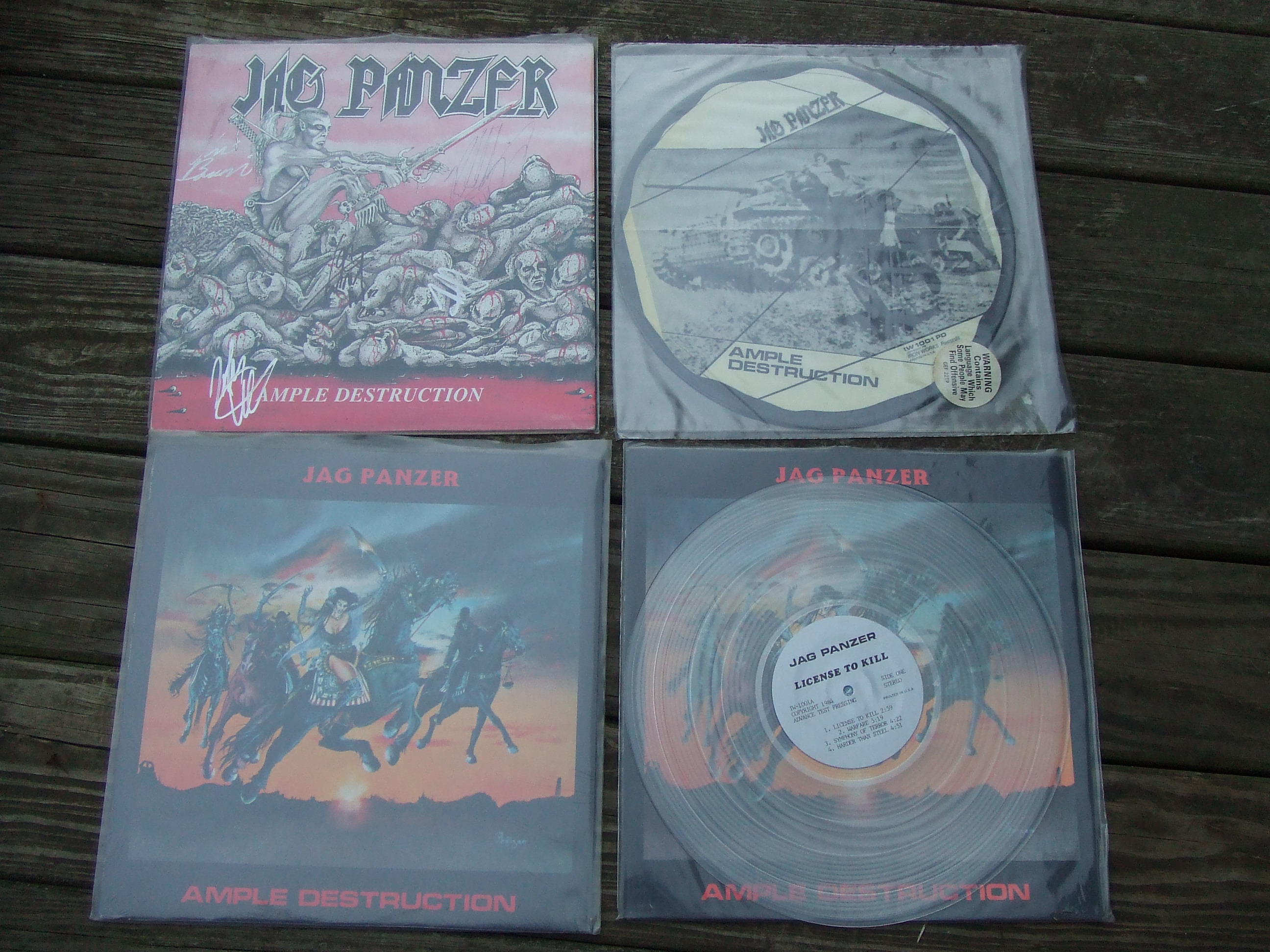 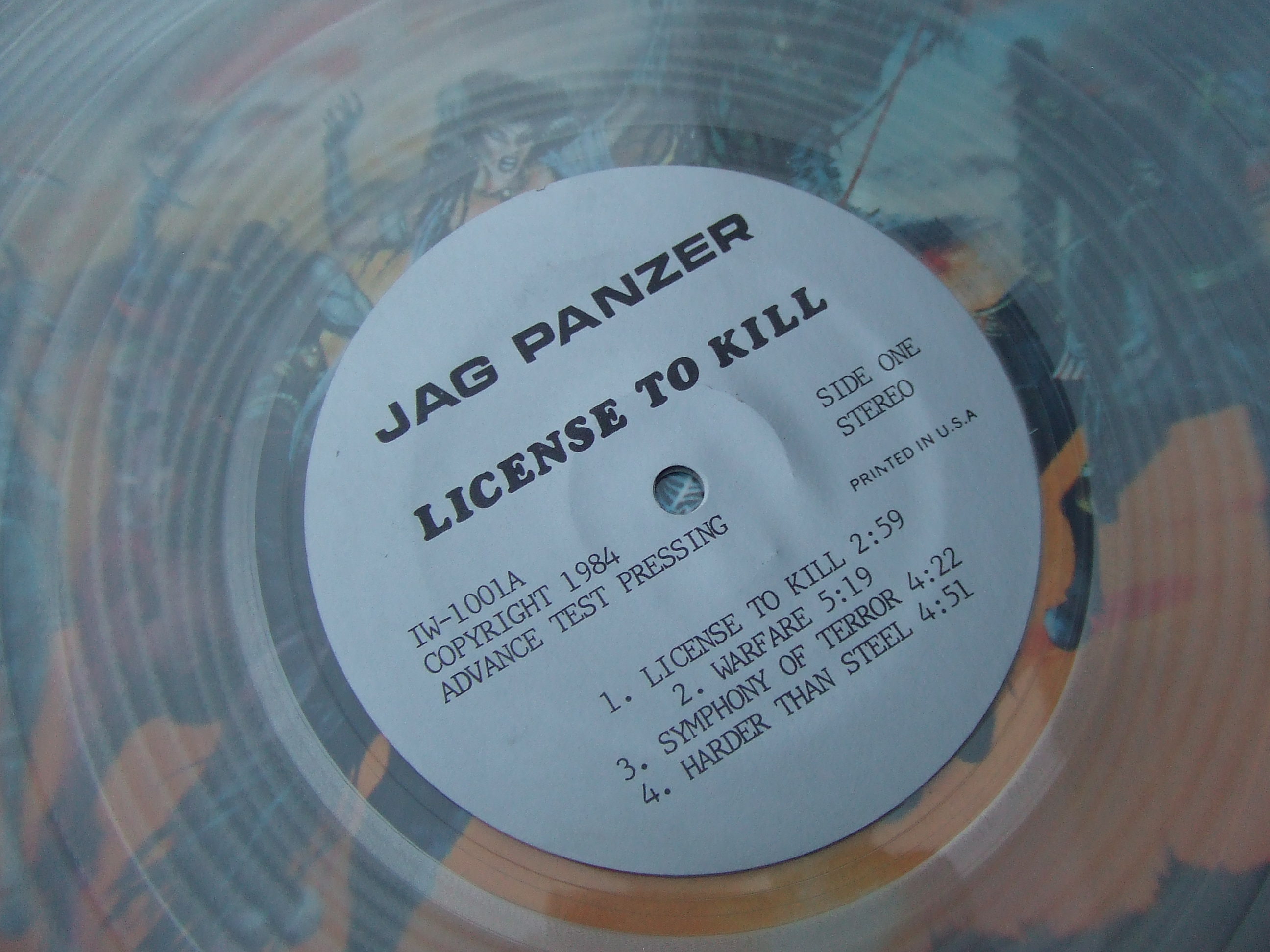 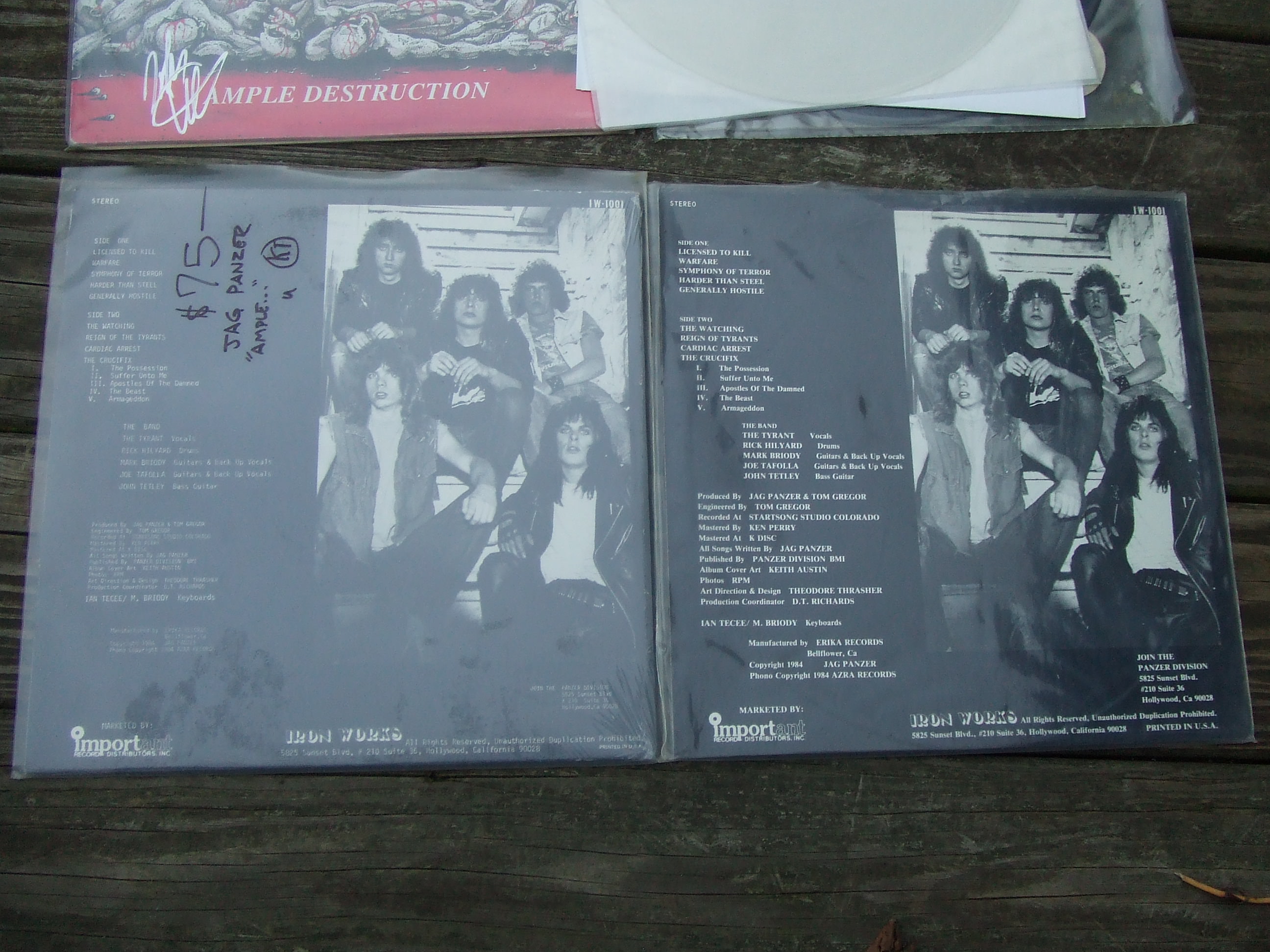 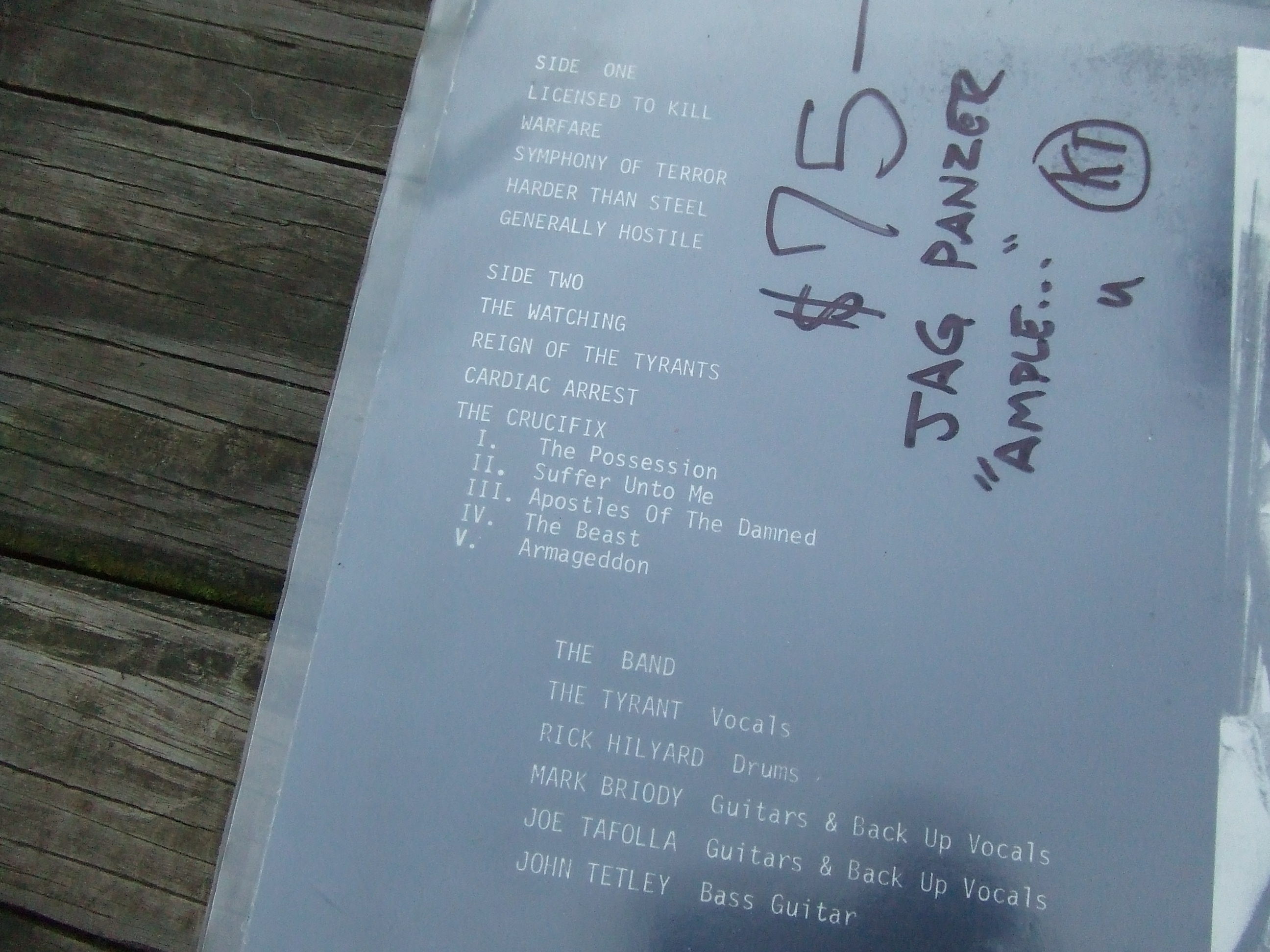 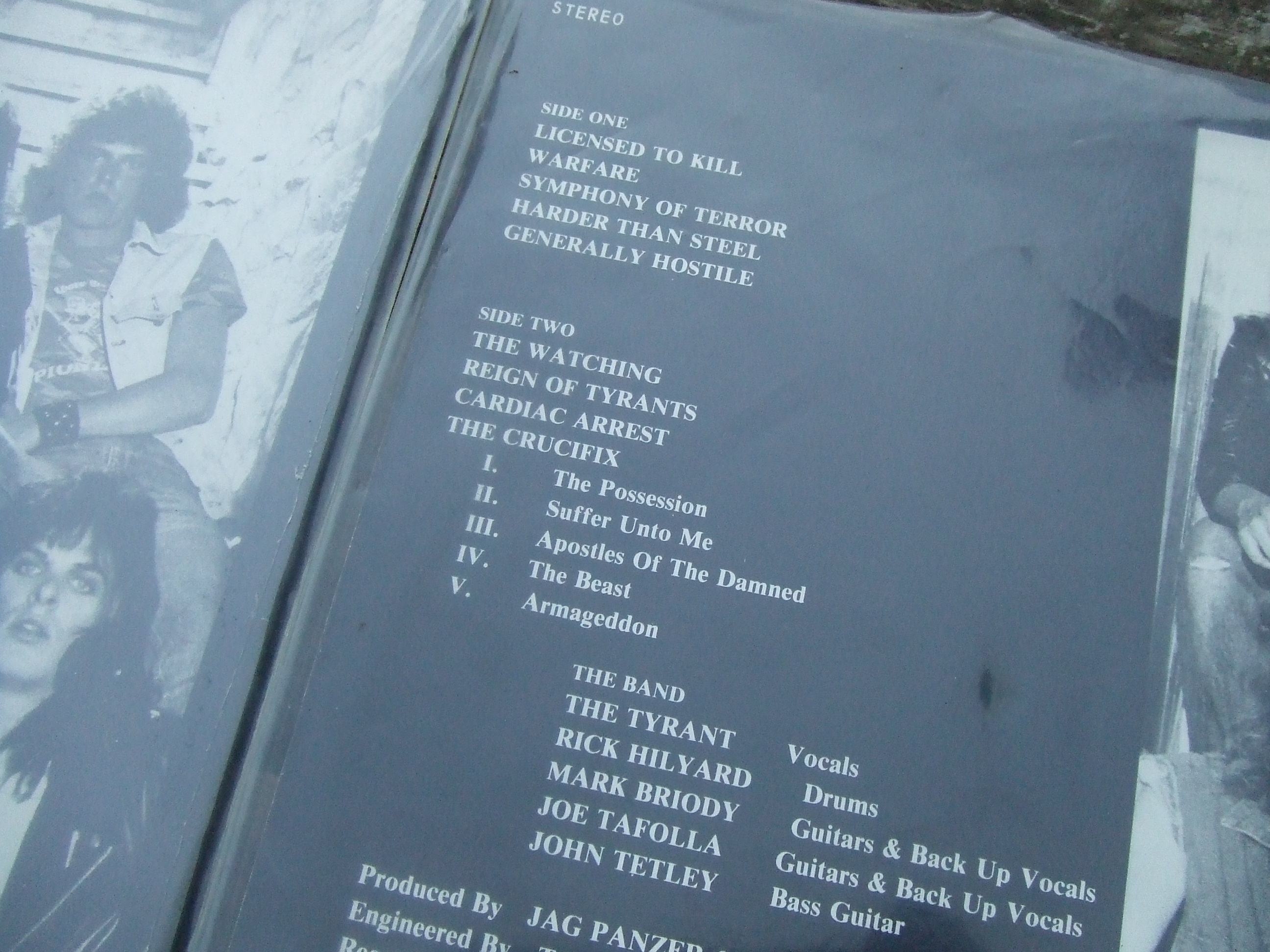 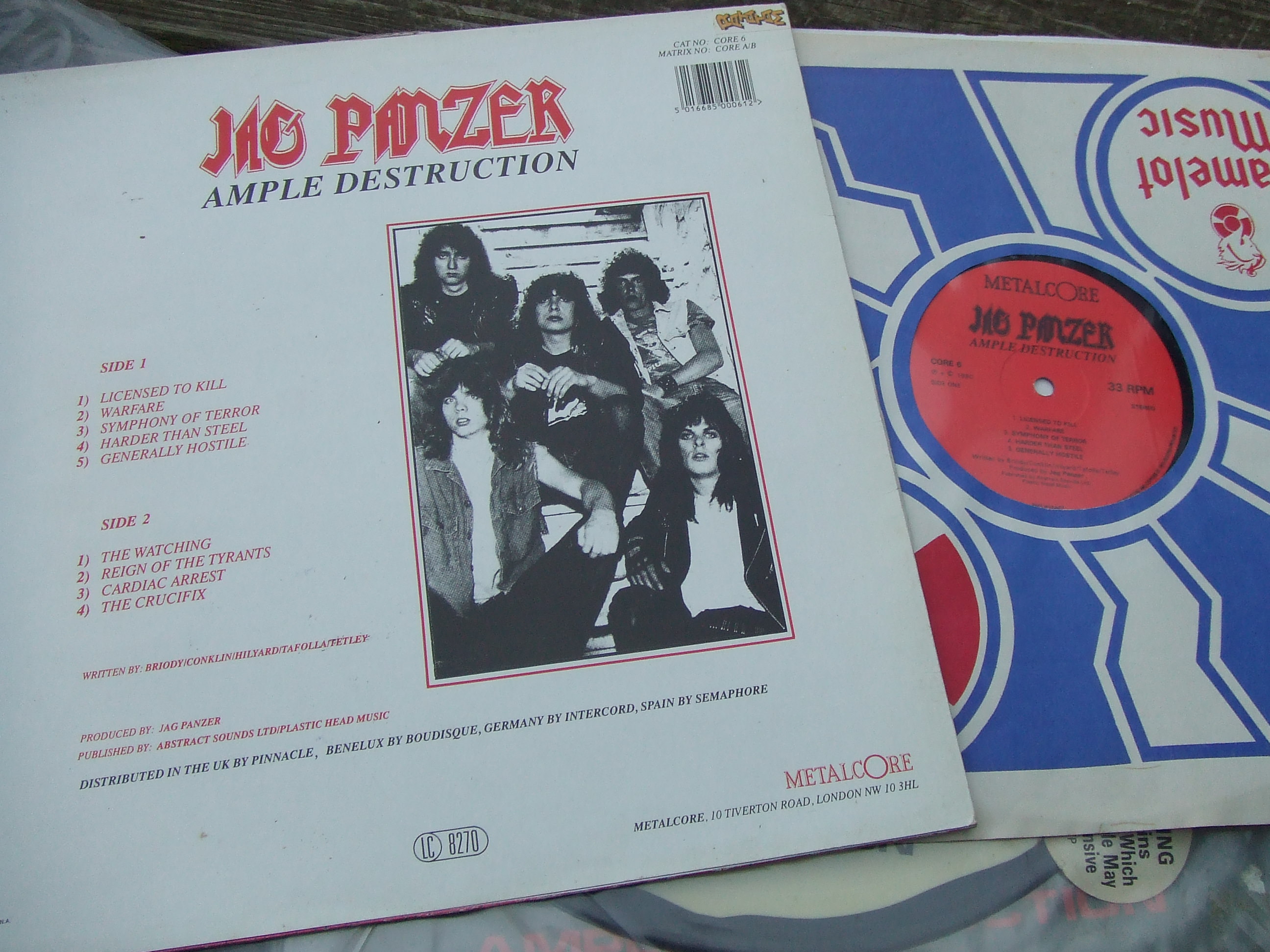 Thanks for posting Northwinds, sorry I didn't get back to this thread any sooner. that's interesting about the difference on the back cover; I'll have to look through my copies to see if they show the same difference.

#10- orig dark red/translucent vinyl version
silver label, red lettering
IW 1001-A kdisc KP YES HE STILL IS L-17904
IW 100-B kdisc KP D.T. DID IT L-17904-X
w/ insert
same track listing as other orig presses
The vinyl appears black under normal light, but when held up to a bright light the vinyl is translucent and a shade of deep red. A copy was on ebay in Jan 2020 and the seller was kind enough to confirm the matrix # for me. This copy and one other are currently listed on popsike.
"I'm sorry Sam, we had real chemistry. But like a monkey on the sun, our love was too hot to live"
-Becky
Top

I checked the 4 copies I have with covers (not counting metalcore or other pressings) and here's what I noticed regarding the 2 different versions of the back cover. I'll refer to the 2 versions as the 'bold' version (print looks like it's in bold font) and the 'typed' version (the font looks more like an old typewriter font).

1- orig press, black print on silver label, black vinyl
--This is the only 1 of my 4 that has the 'typed' version of the back cover

2- orig press, red print on silver label, clear vinyl
--Has the 'bold' version of the back cover

3- orig press, red print on silver label, red vinyl
--Has the 'bold' version of the back cover

I don't think we can draw any real conclusions from this info since the sample size is too small. The pattern, such as it is, *could* indicate that the 'typed' version of the back cover only came with the copies that have the black print on the labels, and the 'bold' version of the back cover came with the versions that have red font on the labels, which in my case means the 2 colored vinyl copies and the clear vinyl test pressing.

When Dave Richards was selling those clear vinyl test pressings (remember, they have a different matrix # than the regular copies) he clearly stated that he was putting them in surplus sleeves. Northwinds and I both have the 'bold' sleeve version with those. This *might* indicate that the 'typed' version was the original version of the sleeve, used strictly for copies with black print on the labels, while the 'bold' version of the sleeve was essentially a second pressing and got used on the copies with red print on the labels, such as the original colored vinyl copies. The leftover bold sleeves were later used to put the clear vinyl test pressings into when Richards sold them. The more primitive look of the 'typed' version would support this idea; I can see a second pressing wanting to replace the hard to read 'typed' font with the clearer, easier to read 'bold' font, whereas I don't know why a second pressing of the back cover wold have replaced the 'bold' font with the weird 'typed' font.

Northwinds- if my above hypothesis is correct, it would indicate that your sealed copy with the 'typed' font is not on colored vinyl but instead is a black vinyl copy with black print on the labels. But see below.....

I want to stress that the ideas I included in this post are really tenuous. I wold not be at all surprised to see this proposed pattern fall apart once a lot more copies of Ample Destruction are examined. IronWorks is notorious for having made all kinds of weird variants, so it's very likely that I'm trying much too hard to impose some order onto these AD pressings while, in reality, no such pattern exists.
"I'm sorry Sam, we had real chemistry. But like a monkey on the sun, our love was too hot to live"
-Becky
Top

IronWorks is notorious for having made all kinds of weird variants, so it's very likely that I'm trying much too hard to impose some order onto these AD pressings while, in reality, no such pattern exists.

UPDATE-
I did some editing to the original post that started this thread to fix an error I made in describing the labels on those versions that have the JP- matrix numbers. Very sorry for any confusion I caused.
"I'm sorry Sam, we had real chemistry. But like a monkey on the sun, our love was too hot to live"
-Becky
Top

UPDATE-
I posted a video on YouTube that shows some of the different vinyl versions of 'Ample Destruction'.

https://www.youtube.com/watch?v=cMhfWo1fJ5A
"I'm sorry Sam, we had real chemistry. But like a monkey on the sun, our love was too hot to live"
-Becky
Top
Post Reply
10 posts • Page 1 of 1

Users browsing this forum: No registered users and 21 guests