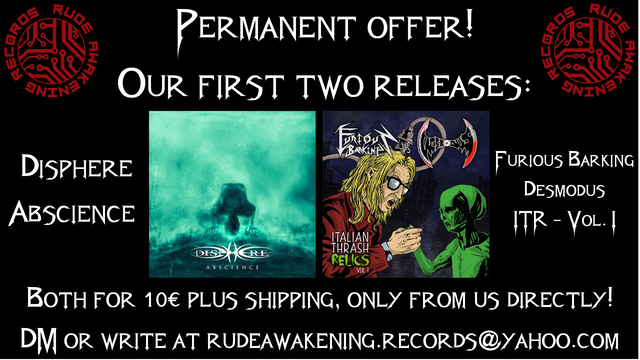 Getting back with a permanent offer, valid worldwide!

HERUKA: a preview track by “Dust from the Deception Sun”

As the release date approaches, Heruka reveals one of the tracks appearing in “Dust from The Deception Sun - A Live Selection from Three Years of Black Metal ”: the chosen track is “The Eleventh Rule”, also appearing on the latest band’s full length.

The Italian Melodic Black Metal band celebrates its latest activity years with a DVD/blu-ray release featuring a selection of tracks from their most recent albums, recorded during an intense studio session at Boiler Studio (Rome, Italy) this summer.

Once again, Rude Awakening Records will take care of the release that will be limited to 50 DVD copies and 50 blu-ray copies worldwide and will be available on 20th November 2021. By the release date, there will be also an audio-only version available on the main streaming and download providers, featuring the complete tracklist. “Dust from the Deception Sun” marks the beginning of a new course for the band, and more news about it will be revealed soon.

New album “Memorie” by Italian Black Metal band HERUKA will be out on 24th May, 2022. Once again, band’s third full length will be published by Rude Awakening Records, which already took care of the most recent Heruka’s releases.

“Memorie” sees a full return to Italian language lyrics with a tracklist of ten songs exploring death themes. The cover is an homage to the painter Salvator Rosa, with a detail of one of his works, “La Fragilità Umana” (17th century).

The first available single is “Presagi”, including a lyric video by Sandro Di Girolamo:

More previews will be available soon and the physical release will be limited to 300 digipack copies worldwide.

While the release date of HERUKA’s new record approaches, the Black Metal band from Italy publishes another extract from “Memorie”. After unveiling the first single “Presagi”, now it’s time for “Ad un Passo”: again, the lyrical content is about a suffering life close to its end and the whole record sees Italian lyrics written in poetic style sharing common themes.

Release date for “Memorie” is set for May 24th, once again the record will be published by Rude Awakening Records and limited to 300 CD copies worldwide.
The artwork is a tribute to a piece of art by Italian painter Salvator Rosa, a detail taken from “The Human Fragility” (1656 circa).

Return to “Take It Or Leave It”