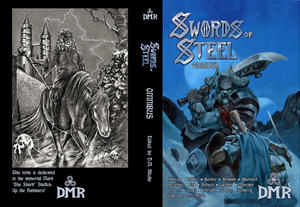 DMR Books burst onto the sword and sorcery scene four years ago with the release of the anthology Swords of Steel. Editor D.M. Ritzlin summoned the greatest practitioners of epic heavy metal to pen tales of heroic fantasy and cosmic horror, the likes of which had not been seen in many decades. Featuring the talents of such musician/authors as Byron A. Roberts (Bal-Sagoth), Howie K. Bentley (Cauldron Born), and E.C. Hellwell (Manilla Road), Swords of Steel proved to be an underground hit among both metalheads and jaded pulp fantasy fans. Two more volumes followed. All three were published in “classic size” paperback format. Distribution was extremely limited, making it difficult for fans outside the US to acquire copies.

In a few weeks that will change! DMR Books is proud to present the Swords of Steel Omnibus Edition, which collects all 23 stories from the three original volumes, plus three new tales. The massive trade paperback version weighs in at a whopping 454 pages! In addition, a digital version is now available for pre-order. The regular price for the digital edition is $4.99, but throughout the month of October it will be on sale for only $2.99. It will be released October 16th. Both the trade paperback and digital versions will be available worldwide through Amazon.

Stories included:
“All Will Be Righted on Samhain” by Howie K. Bentley (CAULDRON BORN) and David C. Smith
“Vengeance of the Insane God” by Jason Tarpey (ETERNAL CHAMPION)
“The Mirror Beguiling” by James Ashbey (SOLSTICE, LETHEAN)
“The Heart of the Betrayer” by Howie K. Bentley
“Return to Stynar Vort” by Joe Minichino (DOOMSWORD) *
“Journey in Somnamblia” by Jean-Pierre Abboud (GATEKEEPER, TRAVELER)
“Eldon” by Chris Shoriak (ICE SWORD)
“Beyond the Mirrors of Faellnoch” by D.R. Lackner (LEGENDRY) *
“The Darkness Among the Trees” by Max Birbaum (LUNAR SHADOW) *
“The Forgotten City of Tehm” by E.C. Hellwell (MANILLA ROAD)
“Beneath Dead Lake” by Geoff Blackwell (GATEKEEPER)
“Thannhausefeer’s Guest” by Howie K. Bentley
“The Chamber of Juleptsu” by Jaron Evil (ALMURIC, ARCHSPIRE)
“The Riddle Master” by E.C. Hellwell
“Eve’s Grave” by Scott Waldrop (TWISTED TOWER DIRE, WALPYRGUS)
“That Than Which There Can Be No More Terrible” by Michael Scalzi (SLOUGH FEG)
“Mystery Believer” by Scott Waldrop
“Red Ochre” by James Ashbey
“Darke Manor” by Jaron Evil
“The Key” by Mike Browning (NOCTURNUS A.D.) and D.M. Ritzlin
“Blue Mistress” by Geoff Blackwell
“The Pirate Prince of Tarran” by E.C. Hellwell
“Stormchaser” by Geoff Blackwell
“The Voyages of Captain Caleb Blackthorne” by Byron A. Roberts (BAL-SAGOTH)

* New story exclusive to this edition

One of the new stories is "Return to Stynar Vort" by DoomSword vocalist Joe "Deathmaster" Minichino. Here's an excerpt, along with two of his paintings.

Interview with Howie Bentley of Cauldron Born and Briton Rites. He wrote three stories that appear in the SOS Omnibus.

Interesting, I was reading about this on Legendry's Bandcamp page, and it says it's a follow-up to the events on their latest album. So then there are no other stories other than the lyrics for the earlier period?
Top

lynx wrote: ↑
Thu Nov 21, 2019 3:35 pm
Interesting, I was reading about this on Legendry's Bandcamp page, and it says it's a follow-up to the events on their latest album. So then there are no other stories other than the lyrics for the earlier period?

D.R. Lackner wrote one other story, entitled "The Wizard and the Tower Keep." It appeared in the Savage Lands anthology from Millhaven Press. I wrote a review of the book here:

Users browsing this forum: No registered users and 14 guests