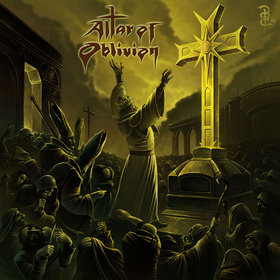 Another killer release from shadow kingdom is out!.This kick ass band is so fucking metal ,i'm surprised how good their style is ,doom metal at its best,if you think that the new band Ghost is the shit,think about that again,Altar of oblivion from Denmark will blow your brains out. Perfection in the vocals ,the entire cd is a must have for any true metal fan ,great harmonies too,definitely this record label deserves a lot of support in the underground .No bullshit ,only pure and honest bands ,if you think that you have discovered all styles in metal,you're wrong!.All six tracks are executed perfectly and pay a damn respectable homage for doom metal ,"The graveyard of broken dreams" is a brilliant track full of excellent riffs and great vocals,what else can i say about this cd? The cover art is AMAZING. If you like Mercyful fate and Candlemass.

Really hope people take the time to check out this one. Album of the year so far and, at least for me, a big step up from the two previous albums.
Top

What an album !!! A masterpeace. It's way better than the ep "Salvation"
Album of the year so far imo !
I listen to it 5 times a day !!
Top

I have a lot of time for Shadow Kingdom records; they continually unearth both items well worthy of resurrection and new releases of serious class. Basically they know Heavy Metal. So despite the fact I didn’t exactly get on withDenmark’s slightly war obsessed Altar Of Oblivion around their debut full length I wasn’t too unhappy to be handed this. Just not overjoyed.

So now you, gentle reader, find me sitting down to a three course meal compromised mostly of my own words, my foot and my hat. That or previously I was listening to the wrong band.

‘Where Darkness Is Light’ begins with a pretty traditional style riff; so far, so Candlemass. Then they lay the guitar melody over it. Then the huge vocals. Suddenly we are in completely different territory. This is cemented by ‘The Graveyard Of Broken Dreams’ which has a refrain to die for and also brings out an almost NWOBHM honesty on the riff and drums which repels any suggestions of pomposity before they even take shape. The subtle keyboards rise here and there bit are very much the opener of doors for those guitar and vocal melodies to enter by.

Melody its the key to Altar Of Oblivion. I’m not saying they are lightweight; far from it, they edge toward that epic doom sound a little bit Candlemass, a pinch maybe of Solstice in their imperious presentation only, the more heavy metal leanings of pre-Albert Witchfinder Spiritus Mortis. Wall Of Sleep or Magma Rise grasp of melody and a smidgen of Atlantean Kodex classicism oddly but perfectly hinted at and the darkness of the sublime Chilean masters Procession. But it is their use of wrenching, often bleak melody and the sounds conjured by their vocals and lead guitar harmonies that push them elsewhere. Maybe its the accent but the vocals, lead and harmony, kind of make me think of what Tyr might sound like if they tried their hand at doom. They rise and fall, beautiful and powerful, true metal singing full of power and emotion and the rest of the band are not outstripped, moving in perfect harmony with prodigious touch and talent. Listen to ‘In The Shadow Of The Gallows’ for a borderline brilliant example of voice, guitar and judicious keyboards flowing toward a song of so much heart and such amazing tunes and you will see what I mean. You can hear the crowd singing along to this when you close your eyes, and close them you will as the song seeps into your blood.

‘The Smoke Filled Room’, a short semi acoustic piece leads to the sheer brilliance of the epic ‘Sentenced In Absentia’ and the last song ‘Final Perfection’ which almost is.

Honestly, I don’t think there is another band out there that really sounds like Altar Of Oblivion at this moment in time. Sun Faced Apostles period Wall Of Sleep are the closest, perhaps, but this band ploughs a distinct furrow and this is epic power doom if you want to add an unneeded new sub genre. Whatever, this sophomore album is a frankly stunning, haunting piece of art full of such emotion and astounding grace that even with Saint Vitus and Bedemon having set the bar for doom this year you will not, I repeat Will Not, hear a finer doom metal album this year.

I haven't been as overwhelmed with this as I had hoped after all the write-ups and forum-hyping. Maybe I've been waiting too long since this album has been delayed like two years or something.

I've heard it five times now, maybe it needs more listens but right now I don't feel that it measures up to "Salvation" or the amazing first half of "Sinews of Anguish".
In some lost corner of the world there sits a leprechaun laughing merrily atop a mountain of mysteriously lost LP innersleeves
Top

mordred wrote:I haven't been as overwhelmed with this as I had hoped after all the write-ups and forum-hyping. Maybe I've been waiting too long since this album has been delayed like two years or something.

I've heard it five times now, maybe it needs more listens but right now I don't feel that it measures up to "Salvation" or the amazing first half of "Sinews of Anguish".

Don't force it, give it time to sink in.

I felt the same way you did when I first heard it. I put it down for a while and then when I came back to it, it just opened up into a completely difference experience for me.
Top

Absolutely great vocals and melodies. And guitar leads. But then I didint catch much special guitar riffs. Drum sound is also quite bad.

But anyways best doom at the moment!
Top

I'm listening to it now. I like it better than the debut, but it's still no match for the amazing Salvation EP which is some of the best epic doom metal I've heard the last years (and not only).
Good against Evil, Evil sure to win