Rats - out now on Pearls for Swine Records

Rats - out now on Pearls for Swine Records 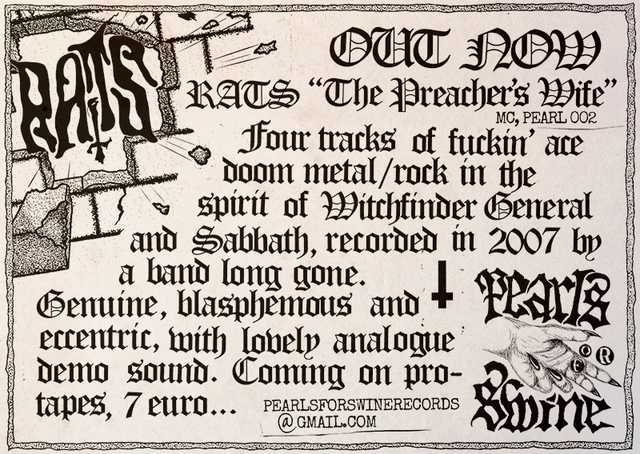 So, lately I’m attempting the business model of releasing often dead things on even deader formats. This is my second tape release, which I thought could interest some frequenters of this forum. Check it out. Listen/order here: http://pearlsforswine.bandcamp.com

“Short version:
Four tracks of fuckin' ace doom metal/rock in the spirit of Witchfinder General and Sabbath, recorded in 2007 by a band long gone. Genuine, blasphemous and eccentric, with lovely analogue demo sound.

Long version:
It is thirteen years old now, the RATS demo. Remember vividly how taken aback I was by that Witchfinder General oozing rock pearl “The Preacher’s Wife”. Still am. That shabby CD-R may have looked modest but somehow wiped the floor with nearly all bands around with similar ambitions. What was that final, essential component this bunch - hailing from the town of Linköping, Sweden - had in it? There just was something very genuine and classic in the songwriting and execution, that you wouldn’t hear every day. Resting on a solid foundation of classic Sabbath while indisputably retaining plenty of personality of its own. And embedded in a sound reminiscing that of a private pressed British 7” from ‘79-82. Quite irresistible.

With this humble release I hope for this underground gem to reach a few more of those that should hear it. Now properly mastered (by O. Carlquist at the Black Path studio), the recording comes on pro-tapes with new layout made by the band, lyrics as well as 35 additional seconds of previously unreleased music.”
Top

Re: Rats - out now on Pearls for Swine Records

Ordered. Curious to see what other dead things you can dig up.
Top

Re: Rats - out now on Pearls for Swine Records

Holy Hell, to say this sounds like Witchfinder General merged with Black Sabbath was a serious understatement.

Ordered immediately!
Laugh at you in ecstasy, wallow in the gore.
Blast you with their twisted minds, behold the Dogs Of War.
Top
Post Reply
3 posts • Page 1 of 1