Veterans of the Various-Wars - Vol. 4 out now! Were you to make some comparative selections at The Corroseum’s Great Olde Metal Compilations Encyclopedia (thecorroseum.org/comps), you’d be let to belive that no other country in the world had more d.i.y. compilation albums by local music org’s and indie labels per capita than Sweden ...and you might even be right! The main reason however for this overrepresentation is that it’s the home country of yours truly and with the help of plenty of friends and fellow colletors I’ve been amassing rare Swedish Hard Rock and Heavy Metal comp-tunes for almost 2 decades now, leaving me with almost 10 hours worth of material to portion out. I say we start off where most things tend to start off in this universe: The Beginning!

This is a special one for me, very specifically themed and very close to heart & hearth. I just love this OLDE-sounding, amateur/mom's garage/proto-HM sound, even the bad stuff makes me smile - especially when it's from Sweden. Hope you'll enjoy it too, but be aware it might be an acquired taste in many cases.
Veterans of the Various-Wars - New Corroseum compilations-compilation series!
Top

Kewl! Looking forward to hear about it.
Veterans of the Various-Wars - New Corroseum compilations-compilation series!
Top

Kewl! Looking forward to hear about it.

It looks likely that the design & perhaps the lyrical content of the song itself were inspired by the cartoon character Rupert.
He might be unknown outside of the UK but he's been a strangely beloved fixture in one of our newspapers (The Daily Express) for nearly a century now and the 'tartan' trousers/scarf combo are his trademark garb. 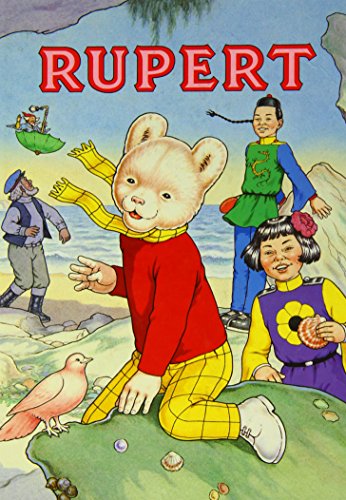 Huge thanks for 'Old Eclectic Warriors', i've been enjoying listening to this for most of the day, and it's proving to be a really strong collection. Particularly enjoying the Menace tracks, really well realised songwriting, performance & production on their contributions, and that rarest of things in obscure NWoBHM, a really strong distictive vocalist. He reminds me somewhat of Trapeze era Glenn Hughes at points in the mellow section of 'Lucifer Never Cries', which is pretty high praise.
That initial riff in the Calibre song is deserving of specific mention too, a highly atmospheric intro that serves to wrong-foot you quite nicely before you get to the more meat & potatoes (but still very enjoyable) nature of the song proper.
The only 'dud' that's lept out at me on these initial spins is Cheater's 'Kill Two Birds', which is played well enough but features the riff from Bad Company's 'Feel Like Making Love' far too prominently to get away with it. The Bad Co. original bores the arse off me, so this rip-off is an instant 'nil points' i'm afraid.
That's a very high positive hit/miss ratio however, so i doff my cap to you in gratitude for your exemplary work.
I'll soak up Vol 4 through the week and share my impressions later.
I cannot, I shall not, I will not obey.
Avenger wrote : I'm not a copyright office nor a judicial entity.
Top

Thanks Dan for these obscurities - this time from yoour country

I would love also compilations like these one just for Denmark (if possible) and oneanother on the rest of Scandinavia (Norway/Finland/Iceland). Of course one for the Japs and other for the Aussies. Holland had fantastic metal in the 80's. After the british is my country of election - but not sure about compilations. What i know is based mostly on demo-tapes.

I'm with few available time so i will be direct and will comment only (for now) on the only 5 bands that are new to me.

GAIN - loved their 3 tunes. Totally agree with your description about the band's sound on each track.
GATHERING FREAK - despite a good production and instrumental quality, the song itself didn't grab me. Sounds a bit "popular"...
because of the vocal melodies i think.
MOOSE - besides GAIN, their tune is killer - just listen the guitar solo.
WC - too bad the vocal is lots of behind on the mix because the riff is a rocker.
ZANE - i listened the 7'' several years ago and this band is ok but nothing too exciting at same time. When it comes to garagish hard-rock of 1979 and 1980 the brits are stiff the winners to beat.

Perhaps i come later for another comment (maybe just on the best tracks) when i re-listen it...

Perhaps in the end of what you're doing - if you don't care much for covers (becasue there aren't any official compis - i can do a portuguese compilation like these ones based on some tapes and obscurities i have...
Knowledge Is Power
Top

@kit:
Glad to read more appreciations on vol.3! Yep, Menace are some of my fave discoveries from UK comps in the last few years. Cheater not so much, no, but at least it's better than that awful Harrier 12"... Fave song out of that selection is still the Ztorm track tho'

I have 2 more tracks by The Moose from other comps, but unfortunately they're more in the Classic/pop-rock direction..
Reeeaally dig the crazy noisy sound of WC but agree about the vox. Still the best song John Norum ever did. And yeah, the Zane track is a bit of a disappointment compared to their crunchy old 7"...
Veterans of the Various-Wars - New Corroseum compilations-compilation series!
Top

Listening to that Bedlam Choir CDEP now. Yes, the title track is that children's telly theme tune, with bonus pinch harmonics. May have been fun live, but on disc it's just naff. Less thrilling than Xentrix's "Ghostbusters." Other tracks are a lot more likeable. Fairly strong & very competent metal/rock. I'll upload it for Poisonoise soon, with scans included.
"I just yell at people"
- Tim Baker
Top

Ah, that's too bad. I was actually kinda hoping that i was wrong in my assumption that the song was inspired by Rupert The Bear, but i never thought for a second it'd be a cover of the actual theme tune.

DaN, vol 4 is a cracking listen, i'm really enjoying it a lot despite having no nostalgic personal associations with the Swedish acts of that time. The music's hugely enjoyable entirely on it's own terms even after all these years.
Tack så mycket!
The two bands that stood out the most over the 3 times i've heard it so far were Arleep (really liked the guitar work on their songs) and Interaction (particularly the mean vibe of 'Stuck In Drugs'). Both bands managed to pack a lot of ideas into their contributions whilst sounding very individual.
Anyone know if Interaction's 2-CD 'Warriors' anthology is worth picking up?
I cannot, I shall not, I will not obey.
Avenger wrote : I'm not a copyright office nor a judicial entity.
Top

Finally got around to actually listening to the first issue (Teutonic Evasion). For me, the best of the bunch were STONE AGE and LAZY WIZZARD. Damn catchy tunes if not the most pummelling tracks of the comp.

Stone Age are called White Witch in the Discogs entry for that sampler the track is taken from. Can you fix this, Dan?
Laugh at you in ecstasy, wallow in the gore.
Blast you with their twisted minds, behold the Dogs Of War.
Top

Have been visiting the Corroseum very infrequently for a few years now but very happy to have discovered these new compilations. Excited to hear these - thanks Dan
I know I ain't doing much,
doing nothing means a lot to me.
Top
Post Reply
56 posts